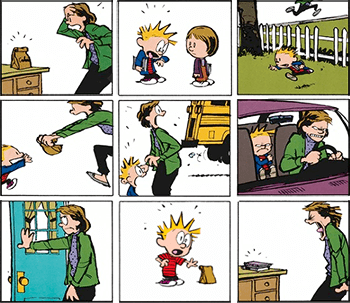 Art Spiegelman: Samuel Beckett once said: "Every word is like an unnecessary stain on silence and nothingness".
Pavel: Yes.
[beat panel]
Art Spiegelman: On the other hand, he SAID it.
— Maus
Advertisement:

Though some people have difficulty imagining movies without spoken dialogue, the first few decades of film did extremely well without it, to the point that many filmmakers dismissed talkies as a gimmicky passing fad or a perversion of real cinema. To be honest, they initially had a point considering that film sound recording techniques were very crude in the beginning, making for some really stiffly staged and dull films until the combined talents of artists and technicians solved the problems. Regardless, perhaps it isn't such a shock to learn that, long after the end of the silent film era, many filmmakers and writers still think that silence is, well, golden.

Although, it should be noted that silent films were never actually silent; they were always accompanied with live music in theatres and this music scored every scene and emotional point of the film, often against the director's intentions for a patch of sound-free action (no dialogue or no music and effects). Josef von Sternberg, director of silent classics and a great deal of important sound films, noted that it was only with sound that he was able to put long stretches into his films without dialogue and music. The real reason directors and other technicians were hesitant to try sound, aside from an instinctive refusal to change their routine, is the fact that the arrival of sound led to film craftsmanship taking a step back. By the end of the silent era, films like Sunrise and The Crowd as well as comedies by Buster Keaton showed amazing technical facility in cutting, editing, and camera techniques, benefiting greatly from the lightweight cameras that prevailed at the end of the '20s. The arrival of sound and theater talent as well as the primitive recording equipment led many early films to be what Alfred Hitchcock once dismissed as "pictures of people talking" or filmed theatre with little in way of inventive camera techniques or creative lighting used to tell a story cinematically. Sound equipment also led to heavier cameras which made it harder, for some time, to achieve the Tracking Shot and other impressive technical feats. Though, many film-makers adapted quickly and worked hard to achieve solutions.

Moreover, if the old adage that a picture is worth a thousand words is to be believed, shouldn't a whole series of pictures be able to speak for themselves?

Nowadays, however, in the presence of so many audible (or legible) artworks, silence has become an innovation itself, often used to stimulate the viewer's imagination or add a vaguely brooding "cinematic" tone to the work. In television and films, running something "silent" usually means removing most or all of the dialogue, leaving just the music and/or sound effects; a few pieces remove even these. Some comics are likewise run completely silent with no dialogue, captions, or sound effects; in extreme cases, they may not even include any written words (e.g., if someone hands a character a note to read, we're not shown what it says). Others selectively cut the dialogue and/or captions while leaving sound effects present in order to have them tell the story.

Sister Trope of Deliberately Monochrome. Frequently used in surrealist films, and is sometimes combined with filmmaking techniques from the silent era for Retraux effect. No-Dialogue Episode is a popular form of Formula-Breaking Episode. Sometimes leads to Filling the Silence in adaptations. When used for horror, it overlaps with Nothing Is Scarier. When used temporarily to add poignancy to a dramatic scene, it's a Moment of Silence. When the Background Music goes quiet to add emphasis or weight, see Sudden Soundtrack Stop. See also Mime and Music-Only Cartoon for animated works that feature little or no spoken dialogue.

Contrast Dead Air, for situations where silence is absolutely not to be desired, and Speech-Centric Work.