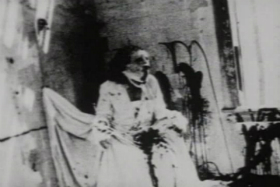 God, in the first scene of the film, in the process of disemboweling himself. It only gets worse from there.
"Language bearers, photographers, diary makers. You with your memory are dead, frozen. Lost in a present that never stops passing. Here lives the incantation of matter. A language forever. Like a flame burning away the darkness, life is flesh on bone convulsing above the ground."
—Opening text
Advertisement:

Begotten is a 1990 experimental Surreal Horror film written, produced and directed by E Elias Merhige. The film was shot entirely in black-and-white with no dialogue whatsoever. The plot, meanwhile, is an utterly nightmarish retelling of the Book of Genesis. It starts with God disemboweling himself, after which Mother Earth rises from his remains and impregnates herself with his semen. Later, she births the Son of Earth and leaves him to his own devices. But a group of masked nomads attack them gruesomely, and the rest of the film shows the resulting struggle.

A (much shorter) Spiritual Sequel, Din of Celestial Birds, was released in 2006.