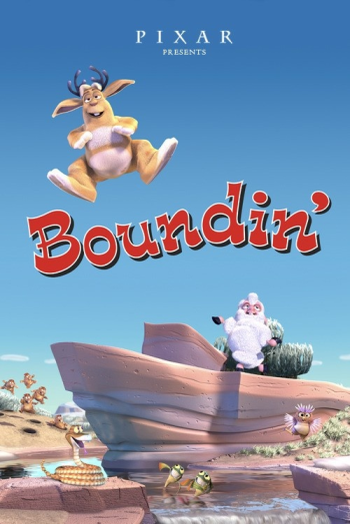 Boundin' is a 2003 animated short film (five minutes) by Pixar, one of the Pixar Shorts. It was written and directed by Bud Luckey.

A sheep lives on a sheep ranch somewhere in the American West. He loves to dance, and his graceful dancing makes him popular with all the other animals. Unfortunately, one day the young sheep is taken away and shorn of all his wool. The young sheep, who is laughed at by all the other animals, loses his confidence and can no longer dance. That is, until a friendly jackalope gives the sheep a pep talk.

Boundin' received a December 2003 screening to qualify it for the Oscars, and it properly debuted in November 2004, when it played in theaters in front of The Incredibles. Bud Luckey, who made this short, provided the voice of Rick Dicker the relocation guy in The Incredibles.