Webcomic / The Less Than Epic Adventures of TJ and Amal 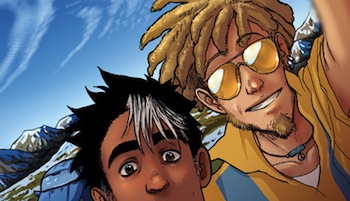 May 16, 2008 - In the span of a single day, Amal calls off his arranged marriage, comes out as gay to his conservative parents, promptly gets disowned, goes on a bender...and wakes up the next morning to find TJ, a lanky, dreadlocked vagrant, frying eggs and singing Paul Simon in his kitchen.

TJ claims that the two have made a drunken pact to drive all the way from Berkeley to Providence. As it happens, Amal promised his sister he'd be there for her graduation from Brown University. And TJ, well... TJ has his own reasons.

The agreement is simple: Amal does the driving; TJ pays the way - but a 3500-mile journey leaves plenty of time for things to get complicated...

The Less Than Epic Adventures of TJ and Amal

is a webcomic by E.K. Weaver that follows the form of a typical Road Trip Plot. It features the budding romance of the title characters in the nerdiest, most believable way possible, as well as some superb dialog, well-crafted characters, and great art that pays special attention to the little details of life. The TJ and Amal website also hosts Weaver's Shot And Chaser, a webcomic which started uploading in 2022.

Tropes that pop up in this webcomic: