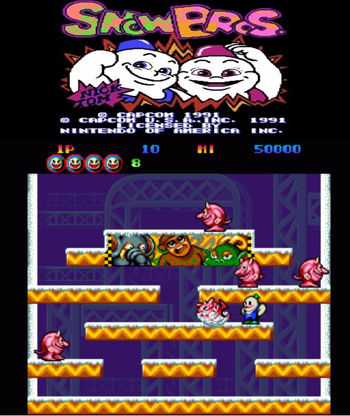 Snow Bros. - Nick & Tom is a 1990 Arcade Game by Toaplan, starring the eponymous guys made of snow, who trap enemies in big snowball that are then used to crush other wandering enemies with. The game is divided into 5 stages made of 10 floors each, with a boss every 10th floor which can be damaged either by pelting it with snow (but it takes a long time) or by bashing it with the snowballs made with its minions.
Advertisement:

There's nothing more to be said, it's an Elimination Platformer with simple but addictive gameplay that received a few ports, a couple of obscure sequels and that gets often compared to Bubble Bobble, even if it's not really the case.

The rights and patents for Snow Bros was sold to a company called Hanafram when Toaplan filed for bankruptcy, who created a sequel.

The game and its sequels provide examples of: