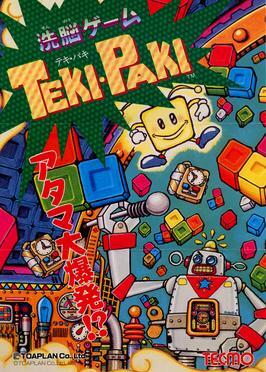 Teki Paki is an Arcade Game by Toaplan which was released in 1991. Unlike most of their offerings, it's a Puzzle Game in which you have to match at least five blocks of the same color next to each other and aim for the highest possible score. Once the whole game board is full, the game ends. There are also other blocks that spice up the gameplay, like dynamite that clears up the whole screen and gives a 100000 point bonus when you match five of it and a Smily that acts as a wild card.