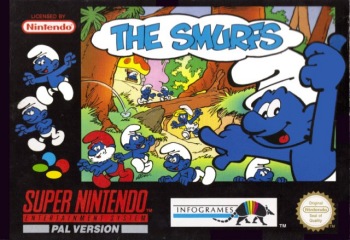 The Smurfs is a European 2D Platform Game based on The Smurfs that was developed by Bit Managers and published by Infogrames.

There are two base versions - 8-bit and 16-bit. The 8-bit version was originally released in 1993 for the Game Boy, then released in 1994 for the NES, Master System, and Game Gear. The 16-bit bit version was first released for the SNES in 1994, Mega Drive / Mega-CD in 1995, Windows/DOS in 1997, and Game Boy Advance in 2002 (as The Revenge of the Smurfs). Only the initial Game Boy version was given a 1994 release in North America with quickly-made Super Game Boy support.

In the game, Gargamel has dinner plans for the Smurfs and has already locked away at least three of their own in scattered cages. It's your job as Hefty Smurf to bravely travel through the dangerous forest and rescue them.