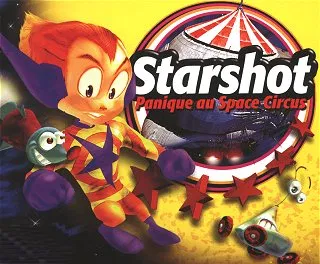 Starshot: Space Circus Fever is a 1998 action platformer game for the Nintendo 64 and PC developed by Infogrames.
Advertisement:

The Space Circus led by Starcash is on bad times as they not only are on the verge of a deathly explosive bankruptcy but are also being sabotaged by the Virtua Circus owned by Wolfgang Von Ravel, a nefarious man known for stealing galactical landmarks and eradicating endangered species to charge admission for seeing virtualizations of them.

Former war weapon and juggler Starshot is then sent by Starcash on a journey for valuable items they can use on their circus act to pay off their debts, all while Virtua Circus tails them on every step of the way.

The game's cutscenes and soundtrack are different between the two versions, and the PC soundtrack has been made available for free

for a look into the game's development and the cancelled 2002 plans for a movie.

Do remember to set Windows XP SP3 compatibility mode on if playing the PC version, as the 2020 release on Steam doesn't warn customers about that at all.