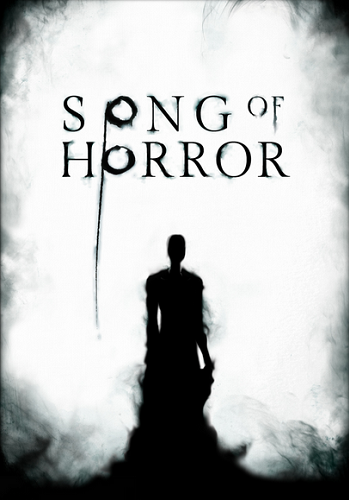 Song Of Horror is a Survival Horror game by the Spanish studio Protocol Games. They sought funding

on Kickstarter in 2015 but failed; undeterred, they spent the four following years working on the game until the first two episodes were released on for PC through Steam on October 31st, 2019. Episode 3 followed on Friday the 13th December, 2019, and the last two episodes came out in March 2020, while the "Complete Edition" will be hitting PS4 and Xbox One on May 28, 2021.
Advertisement:

The story begins with the vanishing of acclaimed writer, Sebastian P. Husher, along with his family. Worried, his editor sends an assistant to investigate, only for said assistant to also go vanishing. What follows is a chain of events that lead to the discovery of a horrible, incomprehensible... being, simply known as "The Presence" that seems to be behind it all.

The game plays primarily like an old-school Survival Horror game such as Alone in the Dark, Resident Evil, or Silent Hill. However, instead of traditional combat, while exploring each location the player will instead be randomly attacked by the Presence, which attempts to kill you in various quick-time events. The key hook is that The Presence is also the A.I. that the game runs on, which switches stuff up every now and then depending on how you play the game, ensuring every play through is different.

Song Of Horror contains examples of: