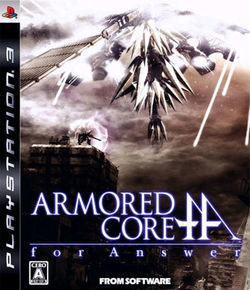 "Think. What are you fighting for?"
Pray for Answer
—Opening cinematic
Advertisement:

Armored Core: For Answer (2008) is the 13th installment of the mecha combat game series Armored Core. It is a direct sequel to Armored Core 4 developed by FromSoftware and published on the PlayStation 3 and Xbox 360 by itself (in Japan) and Ubisoft (North America and Europe). The game utilize the old game engines, but with a new storyline and many customization options to play with.

The Lynx War has become the past. Pax Economica, the system that promised to bring peace to the world is long gone. The surviving corporations are forced to move in wake of massive Kojima Particle contamination unleashed during the ruthless era of corporate warfare. Massive floating platforms called Cradles are built, each housing 20 million civilians. They soar at 7,000 meters above the ground, where the air is still clean and safe.

Still, something is always moving on the surface. The League of Ruling Companies has left their Lynx behind. Now answering to League-run organization Collared, they use almighty NEXTs to secure resources for Cradle. The mercenaries, alongside corporations' gigantic Arms Forts, maintain corporate grip and crush any remaining dissidents on the surface. Such is the status quo that you are the weapon arms of. Still, such a condition wouldn't last long. And all it takes to break everything apart is for someone to ask a right question...

For Answer uses the same features as Armored Core 4, but the game speed has been increased significantly and it also adds Assault Armor, a high-risk, high-reward attack that drains Kojima Particles from Primal Armor to create a massive explosion, on top of many new NEXT parts and schematics. The game has both a single-player campaign with branching paths and PvP multiplayer.