Strayed
The Player Character of Armored Core For Answer. They are a Lynx Pilot, accepting tasks from various different companies during the Economic War before eventually being forced to choose a side. 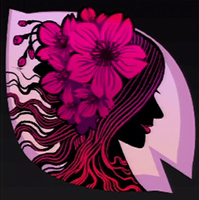 "You've chosen your Answer. Now see it through."

A former NEXT pilot who fought in the Lynx War, now serving as Strayed's operator.

The League of Ruling Companies

The League
After the National Dismantlement War, Six major defense and tech companies came together to form The League, who put the Cradles into the atmosphere, brought the Lynx under Collared, and brought about world peace. But things change over time, and the League is now a shadow of it's former self, and war has risen again under their watch as their members begin vying for resources.

The League as a whole provides examples of: 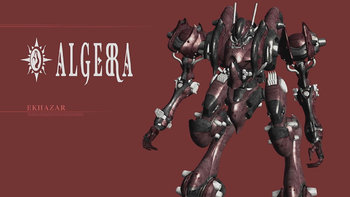 The numbers don't lie. Neither do the results.
Formerly known as Eqbal back in AC4, The Middle East/South Asia based Algebra rebranded when it joined the League and has been lauded for it's strong production line, and enormous line of NEXTs, the most of any company in the game.

Algebra likes light, fast, and close range NEXT designs, such as their newest model EKHAZAR, preferring shotguns, lazer blades, and being impossible to hit to anything long-range. Their affiliated Lynx are 14th Ranked Irbis Ornstein, and 15th Ranked Shamir RaviRavi, who take Algebra's fighting style to heart.

Their signature arms fort is Cabracan. 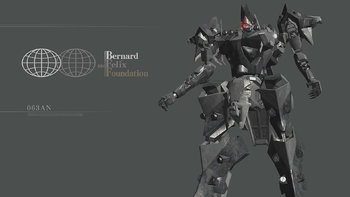 Precise, in all things...except Arms Fort manufacturing
If there was any company in For Answer that got hit the hardest by Pax Economica, it was BFF. Formerly the most powerful company in Europe, BFF was destroyed and then rebuilt by GA, and has rebuilt much of it's capital as a Naval power, cornering the market on ships. However, as the years went on, it's clear that the hasty rebuild has dampened the effectiveness of their weapons and NEXTs.

BFF specializes long-range, precise, and accurate parts that can take out opponents before you even see them, and everything from their Normals to their NEXTs reflect this. Their signature NEXTs are the -AN models, with the 063AN being their flagship mech in For Answer. Their affiliated Lynx is Lilium Wilcott, who is ranked 2nd.

Their signature arms fort is the Spirit of Motherwill. 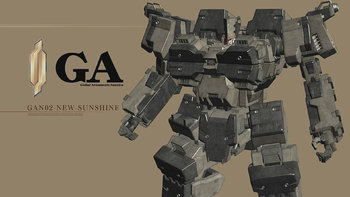 More Dakka; The Company
Once the largest and most dominant corporation on the planet based in the Rim of the Pacific, the GA of For Answer has taken a significant hit in terms of power as OMER eclipsed them in the Economic Wars era. Since then, they've spent their time acting independently of the League, and are normally causing skirmishes with rival company TORUS and Interior Union.

GA is known for big, boxy, heavyweight NEXTs like their signature SUNSHINE model that use ballistic munitions to shred opponents to scrap metal and withstand whatever gets thrown back at them. Their subsidiaries are Cougar, a company based on building Boosters for your NEXT, and MSAC International, who make primarily Missile-based parts. They are also affiliated with Arisawa Heavy Industries, who make tank-variations of GA NEXTs. Their affiliated Lynx are 18th-Ranked May Greenfield, a friendly if slightly reckless pilot, and Roadie, who survived all the way from AC4 and is ranked 4th in Collared. 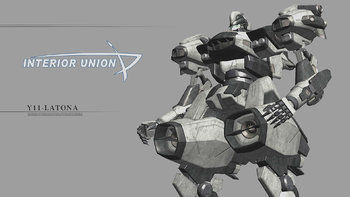 Beam Spam; the company.
Formed from LeoneMeccanica and Melies merging, the Europe-based Interior Union is the number one in high-tech gear for NEXT pilots, and are famous for their laser technology, as well as cornering the market on fossil fuels. They took the remnants of Global Armaments-Europe and Akvavit, and helped them rebuild as TORUS, which has riled up GA something fierce. They are also unique in that all of their affiliated Lynx are Women, and all of whom can put Strayed through a lot of trouble.

The Union's NEXT's, like TELLUS, RIGEL, and LATONA are primarily laser based mechs that have fantastic energy effiency, but tend to be a lot heavier than they look. Their affiliated Lynx are 20th ranked Ay-Pool, running a support craft build, 16th ranked Kasumi Sumika AKA "Serene Haze", who also happens to be Mission Control for the player, 6th-ranked Stiletto, running a high damage tank build, and 3rd Ranked Wynne D. Fanchon, running a speed-based build.

Their signature Arms Fort is Stigro 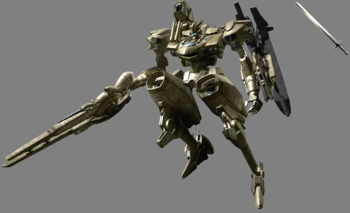 Rank: 3
Craft: NEXT Reiterpallasch
Fought In: Attack Arteria Cranium, Occupation of Arteria Carpals
Allied In: Defeat ORCA Main Forces, Defend Arteria Cranium
"To treasure a life...is that something to laugh at?"

Interior Union's champion LYNX, who rose to prominence after the end of the LYNX War. Her strong record and impeccable piloting skills have given her the Red Baron's of "GA's Disaster" or the "Brass Maiden" by many frontline soldiers, depending on who you ask. She is a no-nonsense woman with high expectations for her fellow LYNX, but does occasionally show a softer side.

She serves as a major ally in the League path and a major enemy in the other paths. 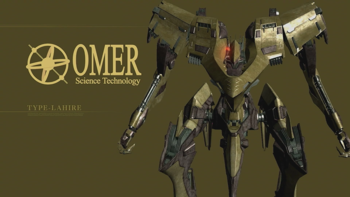 Air Superiority, Corporate Superiority...and they'll enforce it if necessary.
The most powerful of the companies in the League, though it cannot keep track of some of it's members. Based in West Asia, Omer took an enormous boost in capital after they took down Akva Vit in Armored Core 4, and for a time were the sole power that could develop Kojima Particles. Now, they seek to consolidate power, and to also eliminate TORUS, who took on Akva Vit engineers.

Omer NEXTs have high PA Rectification, prefer aerial combat, and are pretty well balanced. Their newest model, LAHIRE, exemplifies this, and both of their affiliated lynx use it. Their affiliated lynx are 12th Ranked Risaia, who runs a close combat-based build, and 1st Ranked Otsdarva, who previously worked for Rayleonard.

Their signature Arms Fort is the experimental Answerer. 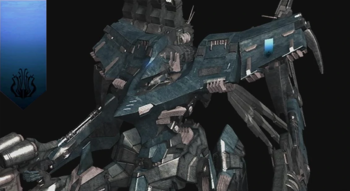 Rank: 1
Craft: NEXT Stasis
Fought In: Defend Line Ark, Attack on Arteria Cranium (Hard Mode, as Thermidor)
Allied In: Defeat White Glint
"Those slimy politicians, with all of their empty calls to arms. 'In the name of liberty.' I'll sink the whole lot of you to the bottom of the ocean."

The Rank 1 LYNX of Collared and Omer's champion, who formerly worked for Rayleonard during the Lynx War. He's sent to defeat White Glint and destroy Line Ark in both versions of the mission. 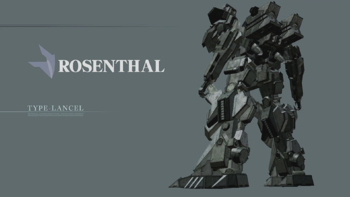 Jack-of-All-Stats never looked so good.
A defense corporation affiliated with the league, with an enormous amount of capital to it's name. They're well known for high quality, general purpose parts, designs and NEXTs, with two high ranked Lynx to their name that are very well balanced, but they tend to be overshadowed by Omer.

Rosenthal is somewhat unique in the League in that they're the only company that doesn't have any Arms Forts, preferring to rely on their generally well-designed NEXTs like the LANCEL and HOGIRE models. Their affiliated Lynx are 11th-Ranked Dario Empio, running a LANCEL, and 5th-ranked Gerald Gendlin, who inherits the "Noblesse Oblige" NEXT and title. 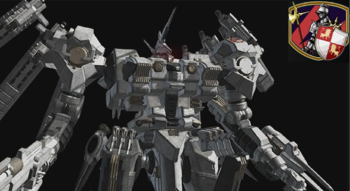 the NEXT Noblesse Oblige, back to bring you down.

Rank : 5
Craft : NEXT Noblesse Oblige
Fought In: Attack Arteria Carpals
Allied In: Defend Arteria Carpals
"Sorry to crash the party. Little hit-and-run bandits like you know no honor. I envy your simple life. Void of responsibility."

The successor of Leonhardt from Armored Core 4, Gerald inherits his predecessor's NEXT, his position as Rosenthal's champion, and his personal sense of honor that makes him widely respected, even among other Corporation-based LYNX. When ORCA attacks Arteria Carpals, Gerald is sent to intercept the attackers in both versions of the mission; the only difference is whether the player assists him or is the enemy awaiting him. 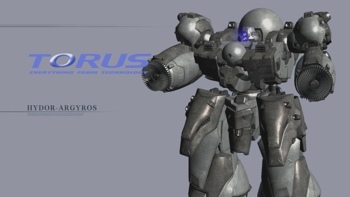 Everything through technology...including the apocalypse.
TORUS is the revived Global Armaments Europe with engineers picked up from the former Akva Vit/RayLeonard that was brought into existence thanks to the Interior Union getting them up and running. TORUS specializes in dangerous, experimental, cutting-edge Kojima Particle weapons that can do a lot of damage very quickly at the cost of one's PA bar. Because of the combined histories, rampant creation and use of Kojima weapons, and support from the IU, TORUS is constantly getting into skirmishes with GA and Omer. Their only LYNX of note is 2nd-Ranked Neo Nidus, who pilots a powerful, Kojima-weapon based NEXT.

TORUS only has one official NEXT with a variant attached: the ARGYROS naturally takes full advantage of the Kojima technology on display. The HYDOR-ARGYROS model has dedicated Kojima Cannon arm parts that can easily tear through most NEXTs. Unofficially, they have no Arms Forts, but it's all but made clear the special Sol Dios Orbit Land Crab that one fights in a mission is probably a TORUS weapon. 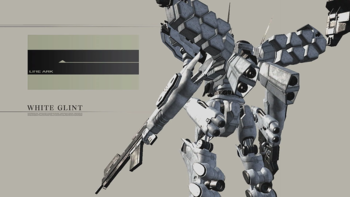 The dream still lives.
The largest ground based power at the start of the game, the only democracy left in the world, and intensely critical of the League. It has little of a military to speak of, with the only thing keeping it from being demolished by the League is their trump card: 9th ranked White Glint, a mysterious yet powerful NEXT.
LYNX White Glint (spoilers for Armored Core 4)

The legacy of Anatolia and Joshua O'Brien lives on.

Once known as Anatolia's Mercenary, White Glint currently serves as the bulwark of Line Ark's military (and their only LYNX if Strayed doesn't join them). He is the protagonist of AC4.

Fiona Jarnefeldt (spoilers for Armored Core 4)
Daughter of renowned scientist and inventor of Kojima technology, Professor Jarnefeldt of Anatolia. She currently works for Line Ark as White Glint's operator, just like she did in the previous game.

For trope examples regarding Fiona during AC4, see here.

Give the League your answer.
The other ground based power, that only pops up after Chapter 2. An extremist group of 12 powerful and dangerous NEXT pilots led by the charismatic and complicated Maximilian Thermidor. Their aims are to enact The Closed Plan, bring the Cradles down, and open the way to space for humanity. By any means possible.

ORCA is comprised of 12 Lynx (or 13, should the player join), all of whom are ne'er do wells and willing to do anything to see this succeed. They also have specialized, Jet-Black Arms Forts called Jets. 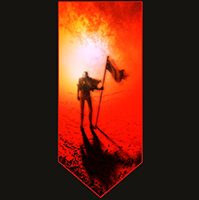 ORCA Rank: 1
Craft: NEXT Unsung
Fought In: Defend Arteria Cranium, Occupation of Arteria Carpals, Attack on Arteria Cranium (Hard Mode)
"We are the ORCA brigade, the most dangerous reactionary force in existence. And this is our grand entrance! Let's put on a show, gentlemen!"

The mysterious revolutionary leader of ORCA, who appears in Chapter 3 shortly after Line Ark's fall. He is ORCA's Rank 1 LYNX and pilots a modified Rayleonard craft, but little is known about him.

In a revolution, blood must be spilt.
A terrorist organization directly threatening the Cradles and everyone living inside them (as opposed to ORCA, which is trying to bring them down to Earth intact). You may end up fighting them in several mission as they attack the Cradles. By Chapter 3, though the group has been mostly absorbed by ORCA, their leader Old King has an agenda of his own, which the player can help him accomplish on the Destruction path.
LYNX Old King

ORCA Rank : 4
Craft : NEXT Lisa
Fought In: Defend Cradle 03
Allied In: Destroy Cradle 03 (off-screen), Occupation of Arteria Carpals
"Good, you came. How obedient of you. Fell the Cradles. All of them. Millions will die. Exciting, don't you think?"

The leader of the Liliana terrorist group. He joins ORCA after chapter 3, but has his own agenda.