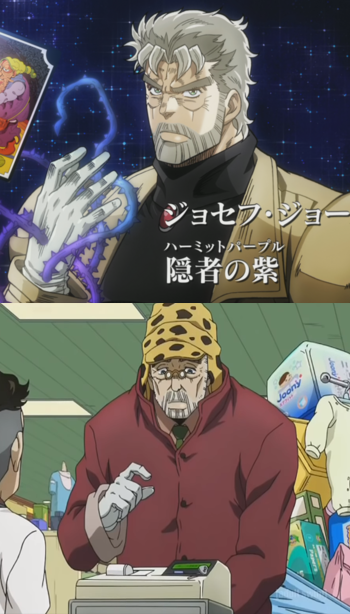 1989: strong, and on a quest to save his daughter.
1999: weaker, and on a quest to buy baby items.
"I was once a badass vampire. But love, and a pesky curse, defanged me. Now I'm just a big fluffy puppy with bad teeth."
— Spike, Angel note Speaking of Angel in an inadvertent prophecy of what was to become of him later on down the road
Advertisement:

The process by which a badass becomes less of a badass.

A belief persists among many writers that if the audience takes a liking to a real badass who fears nothing, has infinite confidence and even carries off defeat with panache, it must mean that what they most want to see is that character reveal a vulnerable side and all manner of inner demons.

It is either that belief or the natural result of Character Development, where extra dimensions are added to an existing character to flesh them out and keep them fresh. Either way, the character starts out badass, and becomes less so over time.

Most often this happens through Ensemble Dark Horse tendencies, they appear so often and are so popular that any attempt to give them greater depths results in them losing what made them so effective in the first place.

Compare with Menace Decay, Motive Decay, Villain Decay, What Measure Is a Non-Badass?, and The Worf Effect. Compare and contrast Bait the Dog and Moral Event Horizon, where a Badass character loses their cool as a result of dog kicking.

Also note that this trope applies when a badass decays within a single continuity. If an absolute badass in your favorite book is portrayed as somewhat less awesome in The Film of the Book, that's not this trope, it's Adaptational Wimp.

This is a YMMV item for subjective examples of when a character comes across as less "badass" due to Character Development (or Derailment). When it's an explicit plot point that a character becomes weaker than they were, you're looking at an inversion of Took a Level in Badass. See also The Taming of the Grue.

Mudkip can crush Boulders by standing on them, its final evolution as Swampert is able to drag a Boulder weighing more than a ton.

Mudkip can crush Boulders by standing on them, its final evolution as Swampert is able to drag a Boulder weighing more than a ton.