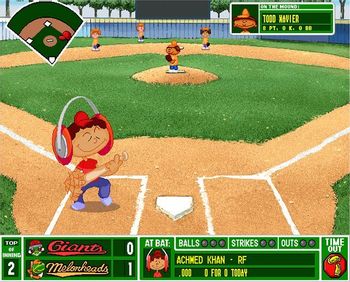 Backyard Sports, formerly called Junior Sports, is a sports video game series originally made by Humongous Entertainment, which was later bought by Atari. It is currently owned by Day6 Sports Group, who has since rebooted it as a Mobile Phone Game series, which is far from the series' original computer game roots. It is the only game series that had licensing from all the major professional sports leagues in North America: Major League Baseball, Major League Soccer, the National Football League, the National Basketball Association, and the National Hockey League.

The series has also spawned a TV special (NFL Backyard Basics: Football Tips from the Pros) and a few books, as well as a Comic-Book Adaptation (a prequel to the game Sandlot Sluggers).

The series was originally only Competitive Multiplayer, but starting with Backyard Football '10, Co-Op Multiplayer is also in the games.

A demo version of Baseball 2001 can be downloaded

from Infogrames, and a trial version of Sandlot Sluggers can be downloaded

In April 2016, Cross Creek Pictures and Crystal City Entertainment acquired the film rights to the series

Certain installments of the series provide examples of:

Sunny Day: "This is Sunny Day, signing off!"