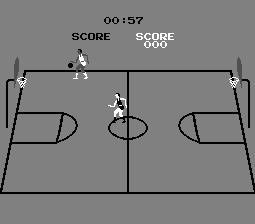 Basketball is an Atari Arcade Game from 1979.
Advertisement:

A one-minute, one-on-one Basketball game begins with two bars of "Sweet Georgia Brown" and the jump ball. If you have the ball, your player automatically dribbles it, and you can shoot it with different arcs depending on how long you hold down the button. If you don't have the ball, you can steal it by going toe to toe with your opponent, or jump up and steal it as he's shooting it.

The Atari 2600 port is known for being played by a couple of flight controllers in the movie Airplane! The Atari 8-Bit Computers port is known for having one of the first clearly African-American video game characters. Both ports have a one-player mode, featuring a very aggressive computer player.

Also one of the first video games in which your character can jump.