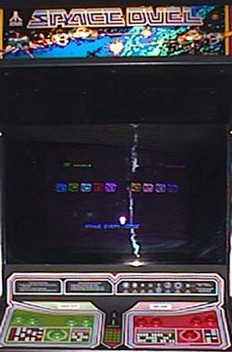 Space Duel is an arcade game released in 1982 by Atari Inc.. It is a direct descendant of the original Asteroids, with asteroids replaced by colorful geometric shapes like cubes, diamonds, and spinning pinwheels. Shoot all objects to complete a level. Space Duel is the first and only multi-player interactive Vector Game by Atari. When Asteroids Deluxe was greenlighted, Space Duel was shelved. When that game did not sell well, this game was taken off the shelf and released to moderate success.
Advertisement:

This game is a two-player color version of Asteroids. It has two different modes of play: competitive and team. In competitive mode, each player competes for points. Players can shoot each other for bonus points, but they don't lose a ship. In team mode, the two players are attached together by a tether. Each player's ship can move and shoot independently while still being attached.

Space Duel has examples of: