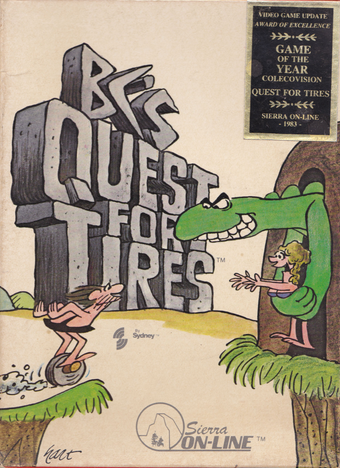 B.C.'s Quest For Tires is a side-scrolling video game based on Johnny Hart's B.C. comic strip that was published by Sierra On-Line in 1983 for Commodore 64, Atari 8-Bit Computers, ColecoVision, ZX Spectrum, MSX, and Apple ][. A homebrew version of this game is in development for the Intellivision. In this game, you play Thor, the inventor of the wheel, who must ride his wheel across a terrain full of various dangers to rescue his girlfriend Cute Chick from a dinosaur.
Advertisement:

It was followed by B.C. II: Grog's Revenge, in which Thor must collect 100 clams that are strewn around on mountain ledges to pay the bridge toll while avoiding tire-eating dinosaurs, rocks, pot holes, and an encounter with Grog, which instantly gives you a Game Over.