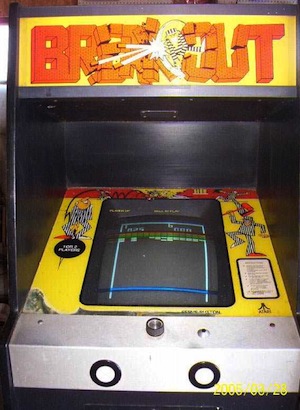 Breakout is a 1976 Puzzle Game by Atari. Originally designed as a single-player version of Pong, it involves moving a paddle back and forth to break bricks with a ball. When all the bricks are destroyed, a second wall will appear. Destroy that and you win the game.

The game was very popular in arcades, and inspired legions of imitators. Its creators, Steve Jobs and Steve Wozniak, were inspired to go and found their own company, Apple.

It had three official sequels. Super Breakout featured multiple paddles and balls, balls trapped above the bricks, and an advancing wall. It was an Endless Game with infinite new walls. Breakout 2000 for the Atari Jaguar was a 3D version with powerups, unbreakable bricks, and multi-hit bricks. Breakout for the IBM Personal Computer and PlayStation had a character named Bouncer in a Save the Princess plot, breaking out of a prison, then traveling to Egypt, a farm, a castle, a factory, and space.

Not to be confused with Breakout Character.