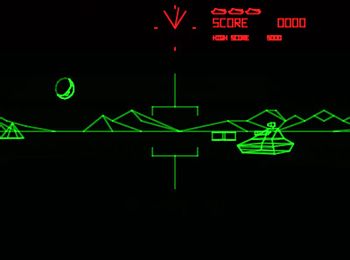 Battlezone, released by Atari in 1980, was the first popular video game to feature 3D graphics, a technological breakthrough at a time when simple 2D games like Space Invaders were the norm. The player controls a tank, in first-person perspective, on a mechanized battlefield against enemy forces equipped with tanks and guided missiles. It is the direct ancestor of every First-Person Shooter, and the US Army even commissioned a customized variant (The Bradley Trainer) to train its tank troops. Surviving cabinets of the game are still very popular with collectors today.

The 1980 version provides examples of: