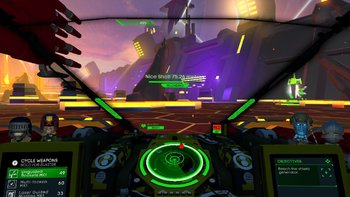 Battlezone is a video game originally released by Rebellion in 2016 as a launch title for PlayStation VR. It is a Virtual Reality based reimagining of the original Atari arcade game, pitting the player in first-person tank combat against a rogue AI. The main campaign can be played solo or with up to three other players, with drop-in drop-out gameplay. The objective is to travel across a futuristic neon landscape, with the ultimate goal to destroy the rogue AI core in a volcano. Traversal is on a hex-based map, with each hex containing either supplies or various encounters. Successfully completing encounters earns "data" that can be used to upgrade the player's tank.

The game was ported to Microsoft Windows in 2017, with support for the HTC Vive and Oculus Rift. A 2018 upgrade, Battlezone: Gold Edition, added support for nonVR gameplay and all previously-released DLC. It was ported to the Xbox One and Nintendo Switch.