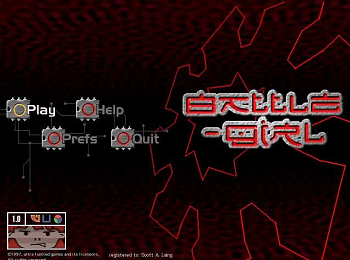 "No one can stop me from destroying the Great Machine and paving the way for the armies of Chaos. No one, not even skinny, loud-mouthed girls with big guns."
— Terminus
Advertisement:

A Shoot 'em Up released in 1997 on Mac and in 1998 on Windows, battle-girl is a loving homage to arcade classics like Defender, Sinistar, and Robotron. Players pilot battle-girl's Soyuz 1183-A Attack Craft against the forces of Terminus, Weapon of Chaos.

It is now Abandonware, and can be found here