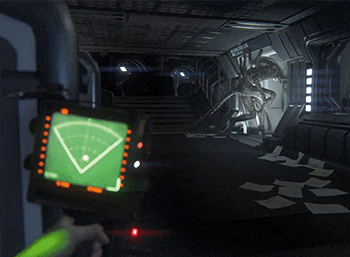 A few real-life combat vehicles have radar support (and all seafaring vessels are required to have at least one) that can help the pilot navigate the battlefield and avoid enemies, so it's no surprise that this is often part of video games that feature such systems. Sometimes it's justified as your character's equipment, or psychic, abilities or Handwaved as A Wizard Did It; other times it's just there with no explanation except to make the player's life easier. It may also partially model non-visual cues that humans tend to get like positional sound location (an aspect of the cocktail party effect

) which are difficult to implement in video game sound systems which often lack the ability to create true positional sound. Alternately, the "radar" is used to detect hidden items instead.

In some games, you will encounter enemies who can interfere with your radar in some way or other. Some jam the radar, filling the screen with static, others just don't show up at all or only show up randomly for a split second. This is usually justified with stealth technology and almost never affects visual detection or lock-ons.

In cases where both enemy and friendly units will be shown, they will be color-coded for the player's convenience.

A common variation is for the radar to only display enemy units that are attacking. It's also often tied to Fog of War, showing only enemies that you actually see normally.

It may be part of a Level-Map Display.