The flesh and the soul shall enter the Palace through separate doors.
Only the strong of mind and body will again reunite as whole.
— From the Collected Memories 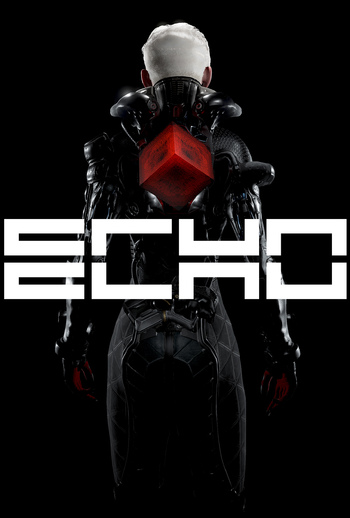 E Pluribus Unumnote One amongst many
Advertisement:

ECHO is a 2017 Genre-Busting Science Fiction game developed by (the unfortunately now defunct) Ultra Ultra, composed of former Hitman developers. It is set in the far future and follows En, a Designer Baby called a "Resourceful" that was freed from her Bread and Circuses life by a smuggler named Foster. Foster was heavily injured during the rescue, and En was forced to "translate" him into a small, red cube. In an attempt to pay him back and possibly restore him, En heads for "The Palace," an enormous technological construct the size of a planet that weirdly looks like an infinite version of the Palace of Versailles. Soon after finding the Palace and turning it on, En finds that the Palace is seemingly alive and filled with an endless number of strange, adaptive clones that are attempting to kill her. So begins a battle of survival between En and the Palace itself.

The gameplay can best be described as a cross between a Puzzle Game, a Stealth-Based Game, and a Third-Person Shooter. When the lights are on in the Palace, En's clones, called "Echoes," learn from her behavior. Drop off of balconies, use stealth, shoot your gun, and the game records your movements. Once a few moves have been recorded, the palace enters "Blackout Mode," where you are free to act as you please—but once the lights come back on, the Echoes will use every skill they learned in the previous light period against you.

The game was released on Steam on September 19 2017, and was also released for the PlayStation 4.

There are plans for a movie, though very little's known about it except that it's being produced by F. Gary Gray and that Derek Kolstad of John Wick fame is going to adapt the screenplay.