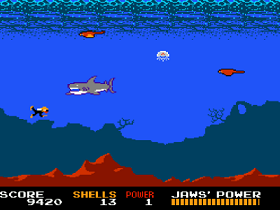 Prepare to see this for the next hour.
This time there's no escape!
— Tagline
Advertisement:

Jaws is a NES game from the year 1987, based on the Jaws franchise, mostly on the fourth film. It was released by LJN Toys and developed by Westone, better known for their work on the Wonder Boy series.

Your main goal is to kill the giant shark. To accomplish this, you sail between two ports with your boat. Most of the gameplay features you being drafted into underwater segments where you harpoon your way out of attacking jellyfish, stingrays and sharks and collect stuff from them. Occasionally, you are attacked by the giant shark itself. You gradually become stronger as you travel in the sea, and once you reach your limit, you'll able to finish the giant shark for good.