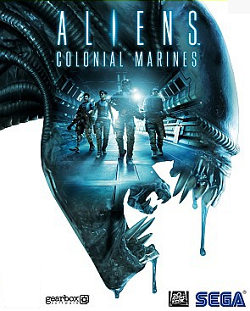 Aliens: Colonial Marines is a First-Person Shooter developed by Gearbox Software, set in the Alien universe. Colonial Marines is presented as the "true sequel" to the Aliens film, and boasts authentic locales from the film universe. It features a story driven single-player mode as well as a four player co-op mode and multiplayer. A single-player Downloadable Content campaign, "Stasis Interrupted", was also released on July 23, 2013.

Seventeen weeks after the events of the second film, a platoon of Colonial Marines onboard the USS Sephora are dispatched to investigate what happened, and subsequently discover the USS Sulaco drifting in space. After the initial team is attacked by an unknown entity, Cpl. Christopher Winter is dispatched to find and rescue any survivors of the original team, and quickly learns that a xenomorph infestation has taken over the ship. Together with his teammates O'Neil and Bella, along with other personnel onboard the Sephora, they are forced to land on LV-426 and quickly get drawn into a deadly conflict between the xenomorphs and Weyland-Yutani, who are attempting to harvest the species for themselves...

The game was released across several platforms on February 12, 2013, and received significant criticism in regards to numerous bugs and issues. Due to the largely-negative response, the Wii U version was cancelled. A lawsuit was filed against Gearbox and publisher Sega for false advertising regarding the differences between the game's advertised features and actual content, with both companies placing the blame on each other. Sega agreed to settle for $1.25 million, while Gearbox refused to settle and successfully petitioned to be dropped from the suit in 2015.

Despite all of the criticism, however, Gearbox issued a series of patches to bring things up to scratch, and the first DLC pack received praise for its content. Though the response is still lukewarm, critics were more positive to the effort and noted that the patching is a step in the right direction.

The game has received several game mods built by fans, the most notable of which is TemplarGFX's ACM Overhaul

. The mod, built by James Dickinson, is notable not only for improving aspects of the graphics and gameplay, but addressing an xenomorph AI error that was undiscovered for more than five years

, caused by, of all things, a one-letter typo.

A prequel, Alien: Isolation, was released in October of 2014 developed by Creative Assembly. It was made with a similar engine to Colonial Marines, but plays considerably differently than its predecessor, emphasizing atmospheric Survival Horror over simply shooting Xenomorphs (and given critical response, it seems to have worked).