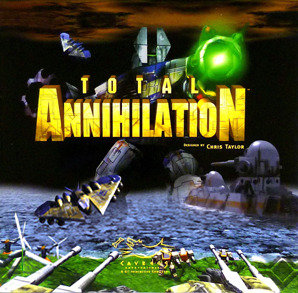 "What began as a conflict over the transfer of consciousness from flesh to machine escalated into a war which has decimated a million worlds. The Core and the Arm have all but exhausted the resources of a galaxy in their struggle for domination. Both sides now crippled beyond repair, the remnants of their armies continue to battle on ravaged planets, their hatred fuelled by over four thousand years of total war. This is a fight to the death. For each side, the only acceptable outcome is the complete elimination of the other."
— Opening Monologue

Released in 1997, Total Annihilation is a science fiction Real-Time Strategy game created by Chris Taylor and Cavedog Entertainment. Pioneering game elements such as 3d models for units, terrain with a 3d heightmap, and strategic warfare on a scale simply not seen before, TA won dozens of awards at its release and is still considered by many critics to be one of the finest examples of the RTS genre.

The war between Arm and Core began over the process known as "patterning", a technology that allowed the transfer of the human mind into machines untouched by disease or pain. The Core government, acting according to the will of the majority of its citizens, moved towards universal patterning, and backed up copies of all patterned minds into a central database on the world of Paradise.

A small group of soldiers rebelled against patterning and the rejection of humanity they associated with it. They founded the Arm, a significant minority of militaristic hardliners utterly opposed to patterning. Around this time, the central pattern repository of the Core formed itself into a single vast intelligence, known as Central Consciousness, which took control of the benevolent Core government and instituted mandatory patterning for all. War became inevitable. Principles were at stake. There could be no surrender.

Total Annihilation, then, is set at the very end of a vast galactic civil war that has utterly destroyed the once-great Arm and Core civilizations. Advanced resource extraction, transmutation and construction technology have allowed entire worlds to be stripped bare and turned into war machines in a matter of days, entire worlds built up and torn down again and again. The Core's mass-duplication of patterns to be downloaded into war machines was countered by a mass cloning programme by the Arm, creating endless armies of identical and utterly disposable combat units; there are no such things as civilians, there is no such thing as peace. The very reasons for the conflict have been largely forgotten over four millennia of hyper-efficient industrial warfare. Only the shattered military remnants of Core and Arm survive, still bitterly fighting over a ruined galaxy, reducing worlds to nothing but barren graveyards of broken machines.

TA, despite advanced graphics (for the time), massive critical acclaim, unique gameplay and ground-breaking technical brilliance, was never hugely popular (it had the misfortune of being released around the same time as StarCraft I) and is largely forgotten today. Its limited success is largely blamed on the game lacking the background material, storyline and character of its competitors. TA is often considered one of the most underrated games of all time.

It is also one of the most moddable games of all time. It was designed from the beginning to have additional units available for download after release, so adding new units or altering existing ones is relatively easy. Total Annihilation fandom and player-made mods still cling to life more than a decade after the game's release, though most have migrated to its Spiritual Successor, Supreme Commander and the unofficial freeware game Spring (which can use Total Annihilation content - though the engine has since progressed so far that you need a lot of tweaking to get it working perfectly, and it'll be graphically sub-par compared to all the other games/mods on the engine - some of whom rival retail games in quality).

Before Supreme Commander, there was the ill-fated follow-up Total Annihilation: Kingdoms, which used the same game engine in a magic-fantasy setting with four (then five) sides rather than two. Never as popular as the original, and the producer Cavedog went belly-up not long after the release of its Expansion Pack, The Iron Plague. However, Kingdoms enjoyed the same modding community as Total Annihilation, indeed to ludicrous levels at times.

Another Spiritual Successor titled Planetary Annihilation has arisen on Kickstarter, this time upping the ante by taking the RTS genre to a galactic scale.

This game is now available digitally on Steam, being bundled with all the bonus "extra" units officially created by Cavedog, as well as more multiplayer maps that were not available on the original disc release and the Core Contingency mission pack.

The game notably managed to avoid a number of tropes and Acceptable Breaks from Reality standard to the Real-Time Strategy genre. These include: