Units Not to Scale 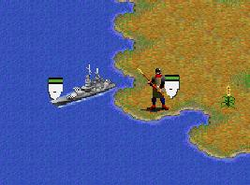 Attack of the 50 Foot Pikeman!note or: Defence of the 3 Yard Dreadnought!
"I do not, for one, think that the problem was that the band was down. I think that the problem may have been, that there was a Stonehenge monument on the stage that was in danger of being crushed — by a dwarf. Alright? That tended to understate the hugeness of the object."
— David St. Hubbins, This is Spın̈al Tap
Advertisement:

A type of visual abstraction in many Video Games, Board Games, and Tabletop Games by which objects that are supposed to be vastly different from each other in size are represented as much larger or smaller than they really are, so that they take up a similar amount of space onscreen or a similar number of tiles on the map. This is common in the Overworld Not to Scale of JRPGs, where your character seems to be about half the size of a city. (Western RPGs are less prone to this, and many later JRPGs have begun averting it.) Also, in many strategy games, infantrymen are ridiculously large when compared to vehicles and buildings. The difference in scale is particularly noticeable when dealing with transports that can carry multiple infantry, and it's very rare that an aircraft carrier will appear large enough to contain more than a handful of aircraft.

This is a case of acceptable Gameplay and Story Segregation. It can be easier to keep track of everything from a bird's eye view when each unit you can select is within a limited size range. Rendering every unit to scale would require either a very zoomed-out viewpoint that would make small units too difficult to see, or a close-up viewpoint that would make large units too big to fit onscreen. Also, you can't really stop at just making aircraft carriers and Humongous Mecha proportionately bigger than one foot soldier; you'd need to create appropriately giant oceans, mountains, and plains just to preserve the sense of realism, as well as give those behemoths enough space to move around in. It's much simpler to just declare that each tile represents however many miles square, and that whatever unit occupies that tile won't necessarily be drawn to scale.

Lately, this trope is getting discredited in video games; better graphics have indeed made it possible to zoom in enough to see otherwise tiny soldiers in good detail, while maintaining the ability to zoom out and see large vehicles and most of the battlefield - with soldiers either very small, or (depending on the game) so tiny they're shown as symbols. However, it will probably remain a case of Tropes Are Not Bad, since it can be a hassle to have to constantly zoom in and out in order to command efficiently. In practice, even strategy games that downplay this trope at least use it to the extent that you can still micromanage a battle from a single zoom setting. Board games and Tabletop games are further constrained by the fact that you can only make physical game pieces so small before they become inconvenient to manipulate, or make the board so large before you can no longer play the game on a tabletop. Just imagine how impractical playing Risk would be if the board representing the world map was gigantic enough to match the scale of the soldier pieces, or if each of those pieces didn't represent a whole army!