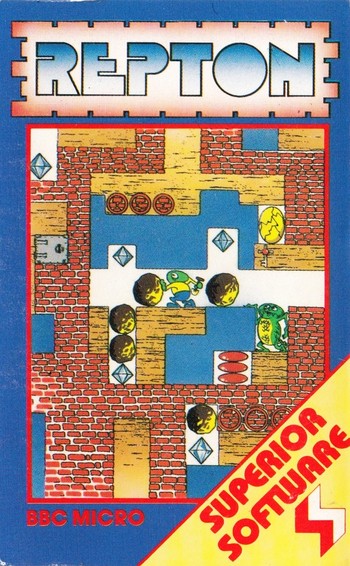 Repton is a classic Digging Game written by Tim Tyler in 1985 for the BBC Micro. The eponymous protagonist finds himself, for no discernible reason, in a maze filled with diamonds, all of which must be collected to complete each level. Obstacles to doing this include falling rocks, reptilian monsters and the ever-present time limit.
Advertisement:

The first game was followed by two numbered sequels, three Mission Pack Sequels for Repton 3, and a final game titled Repton Infinity because it included an editor allowing you to reprogram the way objects behaved, essentially allowing the creation of entirely new games. Each subsequent game added to the basic format new objects and obstacles, the most important being "spirits" that follow the walls and have to be guided into a cage (and often into a particular cage, working out which being one of the level's puzzles). Repton 3 is the most popular game of the series, as it strikes just the right balance in terms of bite-sized puzzles and variety of obstacles, and also allows the character sprites to be redesigned. Many of the Mission Pack Sequels take advantage of this by placing Repton in a completely different setting, ranging from the American West to the far future.

Beginning in 2003, the games (so far not including Infinity) have been re-released for the PC by Superior Interactive

, together with the Expansion Pack Repton Spectacular. An additional BBC Micro game, Repton: The Lost Realms, originally written in 1988 and lost, was rediscovered in 2008 and published in 2010.