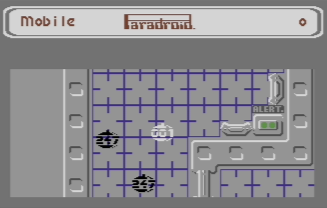 A video game developed by Andrew Braybrook, released by Hewson Consultants in 1985 for the Commodore 64, later ported to the Amiga and Atari ST.
Advertisement:

The game takes place on a spaceship where the robots have gone berserk and are now universally hostile. The player controls an "influence device", which is self-propelled and armed with some low-powered lasers, but whose most important ability is to take control of a nearly droid and control them for a short duration. Higher-level robots possess stronger weaponry, which may be used when the influence device is in control of a particular model.

To take control of a particular droid, a minigame is played consisting of sending pulses through representations of logic gates to gain control of the robot's processor, while the robot you are attacking does the same thing. A central game mechanic is that the number of pulses you can send depends on the level of the robot you currently control, making it difficult to transfer from a low-level robot to a high-level robot without taking some intermediate steps.

The game is well remembered, and several remakes have been made for modern machines.