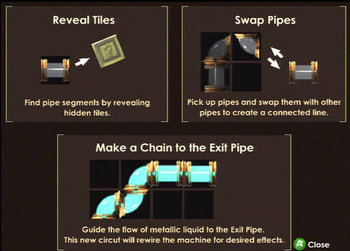 One would expect a place like Rapture to have better security systems.
Advertisement:

A minigame in which the character hacks a machine or software system, either to open a password-protected locked door or to access some benefit that the machine is withholding. Occasionally this will extend to Mecha-Mooks, allowing the player to disable or reprogram them to fight on their side with a change in color. Hacking minigames come in a wide range of forms.

Any kind of realistic hacking would be too slow, too hard, too dull, and would require knowledge that most players just don't have. Hacking minigames bridge the gap between realism and fun. We can assume the minigame is just a player-friendly representation of the character's difficulty with the hack, and that characters are indeed hacking properly, even if we don't see it.

Subtrope of Hollywood Hacking. Sometimes these minigames allow for some Menu Time Lockout.