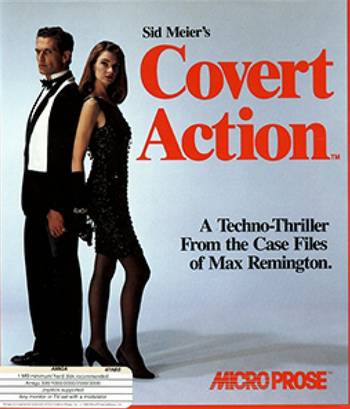 Cover Action was a game released in 1990.

The player is Max Remington, a "freelance" spy. Following authority only when it suits him/her, he/she works for various Western agencies and is permitted to operate because he/she is very, very good at espionage. Max Remington does respect some authority though: he/she will always take a case at the direct request of the American President. With new threats appearing all over the world, the President is making a lot of such requests for Max to work for the CIA. As Max Remington, the player will solve these cases and foil international terrorist plots before they happen. —Or, fail horribly.

A game by Sid Meier, who, these days, regrets it a bit, as it contains two reasonably good but very very different games in it. In Sid's words, the shift between the two works against the overall experience - by the time you finish a particular task in one of the two games, you've forgotten what you were trying to do in the other.

Half of it is reminiscent of a Carmen Sandiego game, where the player flies from city to city, finding secret agents, tracking down enemy organizations, following cars, and the like, all from a partially-menu-based, partially-mini-game-based interface. Once the player discovers a need to break into enemy offices, though, the game switches gears entirely, and becomes a top-down sneaker - a Stealth-Based Game seen from the ceiling. The player can assault guards head-on with grenades, and even win, but it would alarm opponents so much that suspects run away and hide in holes like cockroaches, and the objective is arresting suspects while having solid proof on hands. So hiding behind the furniture, using knockout gas (and planting gas grenades as traps, for that matter) and Dressing as the Enemy is the only way to win on higher levels.

This game shows examples of the following Tropes: