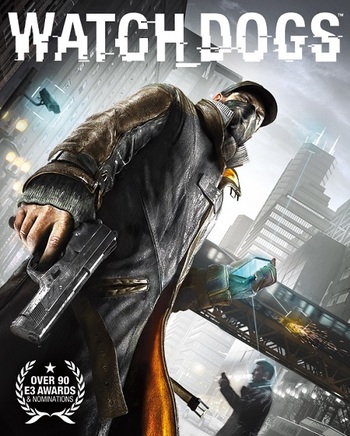 connection is power.
"In this city, no one can hide from me. No one."
— Aiden Pearce
Advertisement:

A game by Ubisoft Montreal, Watch_Dogs is set 20 Minutes into the Future in a Chicago run by MegaCorps and the "Central Operating System" (aka ctOS), a massive software that monitors and manages all aspects of city life akin to a computer operating system.

You play as Aiden Pearce, a rebellious hacker vigilante out to fight the system that the city's corrupt elite abuses for their own ends. The most unique point of the series is the ability to interact with the surrounding world via Hollywood Hacking: players hold the ability to steal cash, trigger events, and even attack enemies using Aiden's phone, which leads to unique combat and gameplay. The game also features both standalone and asynchronous multiplayer, where players can seamlessly "invade" other people's single-player games.

Opening during a heist at the Merlaut Hotel, Aiden acts as a proxy for fellow hacker Damien Brenks in order to siphon millions from customer bank accounts. The duo is caught in the act and, no thanks to Damien's stubbornness, traced for their lack of caution and forcing Aiden to flee the scene. Later driving through a tunnel with his niece Lena, Aiden is pursued by a group of hitmen, who shoot out his tires to make an example of him; losing control of the car, Aiden crashes, and the accident ends with Lena's death. Fast-forward a year, and Aiden, now The Cracker codenamed "The Fox", finds himself pummelling Maurice Vega, the man who pulled the trigger. Following a few loose ends that come from his interrogation, Aiden finds himself digging deeper into the past to get the revenge he craves.

The gameplay is a unique blend, taking cues and themes from several other series, including Deus Ex, Assassin's Creed, Splinter Cell, and Grand Theft Auto, with stylistic evocations of Person of Interest. It also shares social, technological and political elements with Daniel Suarez' Post-Cyberpunk novel, Daemon.

The game was previously to be released as a launch game for PlayStation 4 on November 15, 2013 but was delayed until May 27, 2014, when it was finally released on PC, PlayStation 3, PlayStation 4, Xbox 360, and Xbox One. The Wii U version has been confirmed to be releasing later than the other versions of the game

, instead launching on November 18, 2014 for North America, and November 21 for Europe. An Updated Re-release of the game is available on Playstation 4, Playstation 5, Xbox 360, and Xbox Series X as part of the Watch Dogs: Legion Season Pass.

A single player DLC called Bad Blood, focusing on T-Bone, was released publicly on September 30th, and a week earlier to Season Pass owners on the 23rd. It is also part of the Complete Edition released with the Watch Dogs: Legion Season Pass.