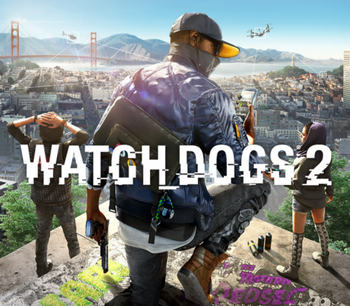 Watch Dogs 2 is an open world Action-Adventure video game developed by Ubisoft Montreal and published by Ubisoft. It is the sequel to Watch_Dogs (released in 2014) and is set in the San Francisco Bay Area (which includes Oakland, Silicon Valley, and Marin County). The game was released for PlayStation 4, XBox One and PC November 2016.

It centers around a new protagonist, Marcus Holloway. Whereas Aiden Pearce (the first game's protagonist) went on to avenge his niece's death, Marcus, instead, is on a quest to clear his name after he was arrested for a cybercrime he didn't commit, and is on the side of rebel hacker group DedSec, who are trying to take down the newly installed ctOS 2.0 and the various corrupt entities within the Bay Area.

Several gameplay additions and improvements have been made to this game, as part of the feedback regarding the mixed reactions garnered by the original game. The first trailer was released shortly after its confirmation.

The second trailer was released later

The game is followed by Watch Dogs: Legion, released in October 2020.

Aliens vs. Predator vs. Etc.

Marcus and Wrench discuss who would win in a fight between Aliens and Predator. And Judge Dredd. And Batman. And Archie.

Example of:
"Cavemen vs. Astronauts" Debate

Aliens vs. Predator vs. Etc.

Marcus and Wrench discuss who would win in a fight between Aliens and Predator. And Judge Dredd. And Batman. And Archie.