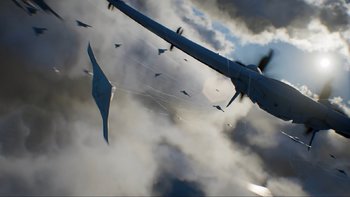 Say hello to my little friends!
"Now you got the three of us!"
— Wilhelm, Borderlands: The Pre-Sequel!
Advertisement:

An alternative to magically summoning beings for your use, you can instead carry them on your person to deploy and recall them as needed. This is common in science fiction with vehicles or robots, though there are some magical examples or even natural examples such as some real life mutualism.

Methods of storage are:

The roles these drones can play for the deployer are:

Drones are often Transforming Mecha or Size Shifters to help conserve space and store more of them. They may also be Equippable Allies.