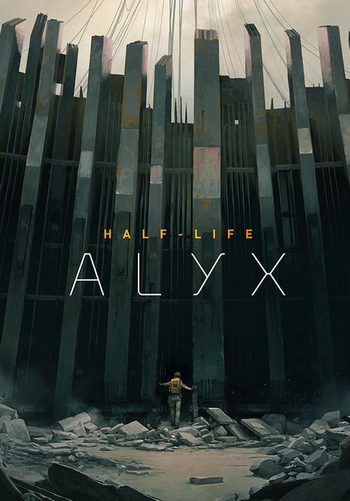 Half-Life: Alyx is a VR First-Person Shooter developed and published by Valve, serving as an Interquel to Half-Life and Half-Life 2, and the first installment of the series since 2007’s Half-Life 2: Episode Two. It was released on March 23rd, 2020 on Steam for SteamVR-compatible systems (e.g. Valve Index, HTC Vive, Oculus Rift and Oculus Quest, Windows Mixed Reality, and PIMAX).

Set five years before the events of Half-Life 2, the player takes control of Human Resistance member Alyx Vance as she and her father Eli take the fight to the Combine. After Eli discovers a secret that the Combine have tried to keep hidden and is captured by them, she must venture into the Quarantine Zone to save him from imprisonment—or worse. Along the way she is assisted by Russell, who serves as Alyx's Mission Control, and the Gravity Gloves (or "Russells" as they're referred to) which serve as short-range prototype predecessors of the Gravity Gun.

Teased as a "flagship VR title," Valve wanted to develop a AAA VR title after working on VR technology with Vive, seeing it at as something players would desire. Following a prototype using Half-Life 2's assets, the game entered full production with a team of 80 people, using an updated Source 2 engine. The game was revealed with a trailer in November 2019. Marc Laidlaw and Kelly Bailey, the former writer and composer of the Half-Life games respectively, served as consultants for the game.

At the end of announcement trailer, the G-Man shows up in the middle of nowhere while pulling a particularly nasty glare at the viewer.

At the end of announcement trailer, the G-Man shows up in the middle of nowhere while pulling a particularly nasty glare at the viewer.