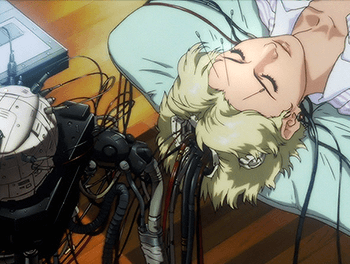 "I think, and my thoughts cross the barrier into the synapses of the machine — just as the good doctor intended. But what I cannot shake, and what hints at things to come, is that thoughts cross back. In my dreams the sensibility of the machine invades the periphery of my consciousness. Dark. Rigid. Cold. Alien. Evolution is at work here, but just what is evolving remains to be seen."
— Commissioner Pravin Lal, "Man and Machine", Sid Meier's Alpha Centauri
Advertisement:

In many Cyberpunk works and occasionally other sci-fi, technology is typically very advanced. Since convenience is highest priority and The Singularity is looming, it's natural to assume that the next big thing thing is embedding cables into your skull and synching your brain with a computer; since a keyboard or mouse can be cumbersome and slower than human thought, it's natural to assume that implants, headbands or helmets will be next to hit the shelves.

Of course, this frequently comes with the benefits and risks of computers albeit inside a person, so expect human backups, self-enhancement, life hacking, people viruses, and Mind Rape among other things.

In a few cases, the use of such interfaces may be limited to cyborgs or aliens or the genetically engineered. If everyone has one, there's a good chance you're looking at a Mind-Control Device or even an artificial Hive Mind.

Actual physical jacks are rapidly approaching Zeerust status nowadays, though, as the heretofore insuperable complications of physical penetrations through the skin seem more and more like unnecessary risks in a world rapidly moving towards wireless solutions. When physical jacks are involved, however, they will be the tell-tale sign of an elite hacker or of certain specific professions, such as starship pilot.

Sub-trope of Unusual User Interface. See Electronic Telepathy if it has wireless capability. Not to be confused with, though frequently used for, Neural Implanting, which is where data or skills are inserted into a person's brain.