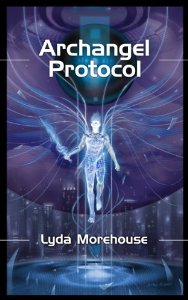 Yes, it's a high-tech retelling of the Book of Revelations. With Angels and everything!
Advertisement:

The Archangel Protocol is the first in the AngeLINK series by Lyda Morehouse. Set in a post World War III universe, where all countries except Russia have become theocracies, the series explores the Biblical Apocalypse through the lens of science fiction.

With access to the LINK, implanted virtual reality internet, being essential for employment, and access to if conditional on being a member of an established religion, Deidre McMannus had her life destroyed when she was excommunicated for a crime she didn't commit. And with angels suddenly appearing on the LINK, and a man named Michael on her doorstep, her life seems to be changing again...

The novel won the 2001 Shamus for best paperback original (a mystery award given by the Private Eye Writers of America), the Barnes & Noble Maiden Voyage Award for best debut science fiction, and was nominated for the Romantic Times Critic's Choice Award. She followed up Archangel Protocol with three more books in the AngeLINK universe: Fallen Host (2002), Messiah Node (2003), and Apocalypse Array (2004). Apocalypse Array made the short list for the Philip K. Dick award.

Those who overcome until the end, will be given power over the nations in order to dash them to pieces with the rule of a rod of iron; they will also be given the Morningstar.