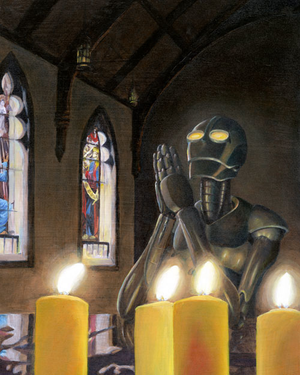 Forgive me, Motherboard, for I have sinned.
Image

"Dhole mentioned on Friday that computers belonging to Orthodox Jews do not have to rest on the Sabbath, and I immediately replied that A.I.s would have to, and then wondered what rest means for an AI, which would have to keep calculating itself."
— Jo Walton, author's note to "When We Were Robots in Egypt"

This character is an artificial intelligence — a robot, a computer, a sentient computer program or similar — who believes in the same religions that its creator species does. This can be Christianity, Judaism, or whatever religions are mainstream in that setting.

However, if the faith is a Robot Religion, see that trope instead: This trope is for robots to adhere to the same religions that the humans (or similar) believe in. Overlaps can however exist, such as mechanical theologians slowly turning Christianity (or whatever) into a Robot Religion.

Compare Do Androids Dream? (for the somewhat more general question of whether or not robots can have souls) and Fantastic Religious Weirdness.