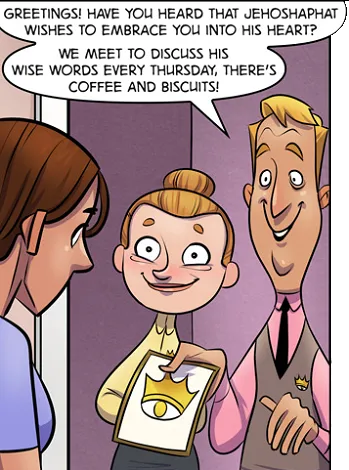 "Hello! My name is Elder Price
And I would like to share with you
The most amazing book..."
— The Book of Mormon, "Hello!"
Advertisement:

Excuse me, do you have a minute to talk about The Lord?

In fiction, lots of evangelical sects will have their appearances in fiction built around the practise of door-to-door evangelising (with maybe the odd peripheral belief). Jehovah's Witnesses (or at least the Hollywood variety) are the ones most frequently shown doing this, partly because they're the first evangelicals people tend to think of and partly because it's what they do in the real world. Mormons are also well known examples. The portrayal is actually broad enough that it sometimes creeps into this broad evangelical Christian depiction where nothing sect-specific appears, or perhaps some stuff from several denominations do.

In fiction, the lead character often finds inventive, clever, or even cruel ways to repel the hapless missionaries. To be fair, it's often quite funny, and it's the character's time and doorstep. To be also fair, it may set up the Unfortunate Implications that it's fine to treat people from minority sects like dicks for their beliefs.

This can be a form of Activist-Fundamentalist Antics. The Missionary has also been known to do this. If it actually works on the very first try, it's Easy Evangelism, and a high likelihood you're dealing with an Author Tract.

The trope name is a pun on Bob Dylan's "Knocking on Heaven's Door".