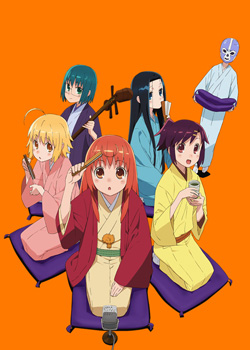 From left to right: Haroukitei Kigurumi, Kuurubiyuutei Gankyou, Buratei Marii, Anrakutei Kukuru, Bouhatei Tetora and no one you should pay attention to.
Joshiraku is a Shōnen manga series written by Koji Kumeta (of Sayonara, Zetsubou-Sensei fame) and illustrated by Yasu (the artist of Toradora!). The manga ran in Bessatsu Shonen Magazine from 2009 to 2013.
Advertisement:

Rakugo (落語, literally "fallen words") is a form of traditional Japanese entertainment. The lone storyteller (落語家 rakugoka) sits on the stage, called the Kōza (高座). Using only a paper fan (扇子, sensu) and a small cloth (手拭, tenugui) as props, and without standing up from the seiza sitting position, the rakugo artist depicts a long and complicated comical story, often based on farce. The story always involves the dialogue of two or more characters- differentiated only through pitch, tone and slight movements of the head- and an ample amount of wordplay, puns and tongue-twisters. All of this makes rakugo very difficult to perform correctly, making it a exhibition of verbal dexterity as much as comedy.

The series is about the everyday lives of a group of rakugoka girls as they practice their skills and engage in Seinfeldian Conversation with each other.

You can see how this can be interesting.

An anime adaptation aired during the Summer 2012 Anime season.