Key Under the Doormat 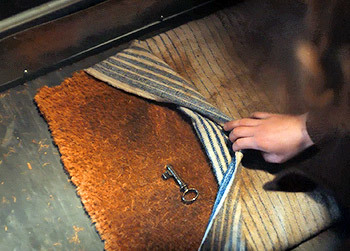 "20 bucks says I can get in in 20 seconds."
— Dr. Gregory House, House, before performing the trope
Advertisement:

Occasionally, the spare key isn't hidden under the doormat, but is rather hidden inside a fake rock, or in a ceramic animal near the door, or even concealed atop the frame of the door itself. There is also a vehicular variant wherein the spare key is hidden above the driver's side sun visor.

Often Truth in Television, despite the advice of pretty much every crime prevention leaflet. Compare We Have the Keys, which often occurs after a door is destroyed or bypassed when a less destructive alternative was available.