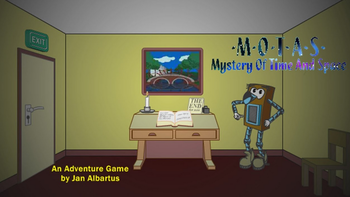 You Wake Up in a Room with little information about who you are or how you got to be here. The door is locked, and you must use various items in the room to escape.
Advertisement:

Only when you escape that room, you find that that's not the end of your escapades. There are more rooms to be visited, more items to be collected, and more doors to be unlocked. And as you progress through these rooms, you begin coming across unusual sights and items, and possibly the beginning of a plot linked with the mystery of time and space.

If this - or at least the "use various items in the room to escape" premise - sounds familiar, you've most likely already played other escape-the-room games before this one. Mystery of Time and Space

(a.k.a. MOTAS), however, was created way back in November 2001; it wasn't just one of the first escape-the-room games around, but started the escape-the-room genre. Even more than a decade later, with many escape-the-room games on the Web containing improved graphics and more complex puzzles, MOTAS's levels (currently 20) and puzzles are still worth a playthrough, if only to get a feel of the genre's origins.