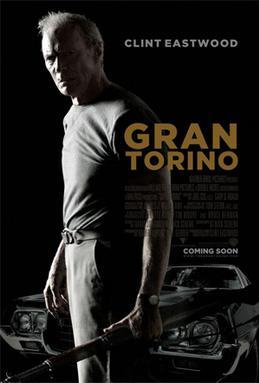 "This year, you have to make a choice between two life paths. Second chances comes your way. Extraordinary events culminate in what might seem to be an anticlimax. Your lucky numbers are 84, 23, 11, 78, and 99. What a load of shit."
— Walt Kowalski, reading a newspaper
Advertisement:

Gran Torino is a 2008 film, directed by and starring Clint Eastwood, in what was once rumoured to be his final onscreen performancenote It wasn't, he's had lead roles in Trouble with the Curve and The Mule, as well as a cameo in American Sniper since. He plays Walter "Walt" Kowalski, an elderly retired veteran of The Korean War living in Highland Park, Michigan (a rundown suburb of Detroit), shortly after the death of his wife. He has difficulty relating to his two grown up sons, who are caught up in their own lives, and generally disapproves of the way the world is changing, such as the influx of the Hmong People, immigrants who fled Laos after The Vietnam War. Next door is Thao Vang Lor, a quiet boy who is pressured into joining his cousin Spider's gang. As part of his "initiation", Thao is pressured to steal Walt's prized possession, a 1972 Ford Gran Torino, but fails, and is caught. For dishonoring his family, Thao's mother asks Walt to accept Thao's help in doing chores around his house, which leads to an Odd Friendship. Spider, upset at Thao's rejection of his gang, begins to retaliate against the family, forcing Walt to intervene.

Not to be confused with the series Gran Turismo. Or the My Hero Academia character.