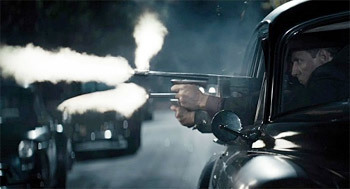 A character is shot by somebody in a moving vehicle, usually either a car or a motorcycle with an armed pillion passenger. The stereotypical example takes place in a "street-level" crime drama and involves somebody firing an assault rifle or submachine gun out of a kerb-crawling car full of Gangbangers. It also shows up quite a bit in older gangster films, where it's probably carried out by The Mafia and/or bootleggers with tommy guns.

In fiction (and also unfortunately in real life, due to the challenges of firing a weapon out of a moving vehicle) this frequently involves Imperial Stormtrooper Marksmanship Academy standards of accuracy, with innocent bystanders in grave danger of dying as well as or instead of the intended target. On the positive side for the perpetrator, it means that the killer can easily make a quick getaway.

This can result in a Multiple Gunshot Death in the case of messier examples.