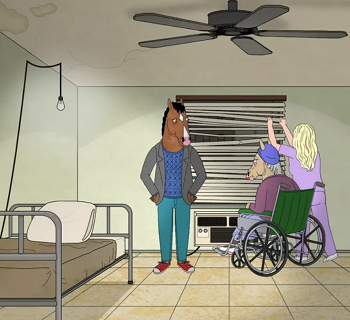 Maybe it's a good thing she can't remember where she is.
Lisa: I can't believe you would take away their fun to make your jobs easier!
Nurse: They should have had their fun before they came here!
—The Simpsons, "Million Dollar Maybe"
Advertisement:

When the elderly can't take care of themselves, often the most practical solution is a nursing home or assisted living facility. The kids and relatives, if any, have their own lives and can't devote themselves to full time care. Or they don't have the additional space that taking Grandma in would require, and relocating (or having the house made disability-friendly) is just not an option. Or the elderly person in question needs round-the-clock expert care (as with Alzheimer's disease or other forms of dementia), instead of just a little extra help. Staying in home with a private nursing staff is out of reach for all but the wealthiest. A dedicated facility catering to the needs of the elderly is the pragmatic solution.

But that doesn't make it easy.

When it's time to "put mom in a home," expect a great deal of angst over the decision, quite possibly dividing siblings over the appropriate course of action. Moving to a new place inevitably means abandoning a house filled with personal effects and memories that are irreplaceable. After arrival, it gets worse: The promised weekly visits from the kids become more like once a month, or once a year. The staff is at best patronizingly helpful, perhaps talking like kindergarten teachers to the residents, paying heed to the elder's physical needs but not to any need for dignity. At worst, they could be neglectful or abusive. Expect the food to be bland and possibly pureed.

The home could be run-down and dingy, but even if it isn't, it will often be clinical, antiseptic, and dehumanizing. Attempts at warmth with arts-and-crafts projects on the walls will be about as effective as motivational posters at a corporate office.

On the other hand, if the kids have some unresolved issues with their parents, then they might see putting the parents in sub-par nursing homes and never coming back as kicking the father-of-a-bitch.

See also Orphanage of Fear and Boarding School of Horrors.