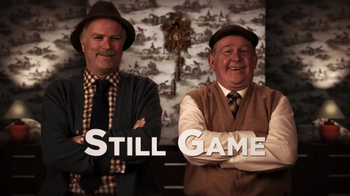 A Scottish Sitcom, Still Game follows the misadventures of pensioner pals Jack Jarvis and Victor McDade, as well as the rest of the community of the fictional Glasgow housing estate of Craiglang. Produced by The Comedy Unit and The BBC, the show was created and written by Ford Kiernan and Greg Hemphill, who also played Jack and Victor respectively.

The origins of Still Game go back to the Scottish sketch show Pulp Video, which ran from 1995 to 1996 and featured future Still Game cast members Kiernan, Hemphill, Gavin Mitchell and Jane McCarry. One of the recurring sketches featured Kiernan, Hemphill and Mitchell portraying old men named Archie, Finlay and Winston. In 1998, Kiernan and Hemphill's characters, now renamed Jack and Victor, appeared in a series of skits in a satirical documentary about Scottish pop music called Och Around the Clock. In these, they are shown to be watching the various artists perform on television and criticizing them. The characters reappeared in Kiernan and Hemphill's sketch show Chewin' the Fat, nearly every episode of which featured Jack, Victor, Tam and Winston, with minor differences from their later counterparts in Still Game. When Chewin' The Fat came to an end in 2002, Still Game was given the go-ahead for its own series.

Running for six series from 2002 to 2007, Still Game was based on a stage play starring Kiernan, Hemphill and Gavin Mitchell (who would later be replaced by Paul Riley; all four would have major roles in the television adaptation). The first, second and third series were originally broadcast in Scotland only but all further episodes were shown across the UK on BBC2 until the show concluded in 2007 due to disagreements between Kiernan, Hemphill and Paul Riley over control over their production company, Effingee Productions. Receiving very high ratingsnote The episode "Wummin" was watched by 4.11 million people—which is to say, more than 80% of the population of Scotland at the time and critical acclaim, Still Game dealt with a broad array of Black Comedy and poignant moments and is among the most popular Scottish television productions ever made.

In October 2013, it was announced that Hemphill and Kiernan would be returning to make a new series. In the wait, a new stage play was released, followed by a short special made for Children in Need in 2014. The show was officially revived with the seventh series which aired in 2016. An eighth series aired in 2018 and it was announced later that year that a ninth was in production which would serve as the final series as Hemphill and Kiernan wanted to retire the characters. The ninth season premiered on the brand new BBC Scotland channel, with the final episode airing on March 28, 2019. The cast also performed several live shows as a last farewell to their characters in the autumn of 2019.

Jack and Victor liven up a dull function by getting everyone to dance The Slosh (to the usual tune of Daniel Boone's "Beautiful Sunday").

Example of:
Floorfilling Song and Dance

Jack and Victor liven up a dull function by getting everyone to dance The Slosh (to the usual tune of Daniel Boone's "Beautiful Sunday").