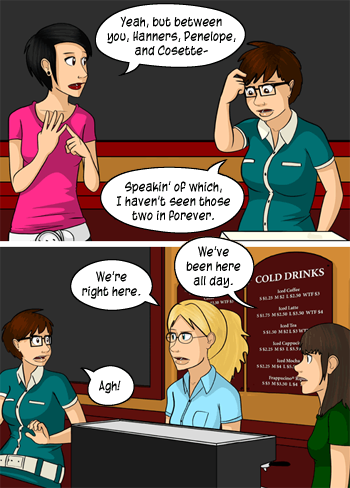 They both work here, you know!
Strong Bad: What are you doing over there?
Homestar Runner: Oh, I'm pretty much here every week. It's just that usually I'm behind the black.
Strong Bad: Guess I should start looking to the right more often.
— Strong Bad Email #100, "flashback"
Advertisement:

The tendency for something or someone to be completely invisible to the on-screen characters simply because it is not visible to the camera, i.e. "behind the black"note In the case of the Trope Namer, Homestar Runner, the videos were always surrounded by a black void — even when that object or person should be in clear view from the perspective of the characters' actual eyes. Some TV shows, films, and video games are guilty of assuming that characters can't see something just off-screen because, well, the viewer can't, and the viewer is the center of their universe. And don't start on the countless cartoons where somebody hides "behind" a spindly tree such that even the viewer should be able to see them...

In any visual medium, every single time a character runs out in the street, and we, the audience, can't see if it's safe, that character will be hit by a truck. Of course this may be explained by them having other reasons not to see around them, like being distracted, in a dimly-lit area etc. The important thing is that they tend to share their vision (and lack of it) with the viewers in order to experience things simultaneously (often things that they wish weren't there to begin with).

One of the more common examples of this trope can be found in top-down RPGs, which feature hidden passages which should be obvious to the characters.

It's also typical that if a woman is naked against her will and shown from the waist up, she only covers her breasts and leaves her lower body completely exposed, as if the other characters also only can see her upper body.

A subtrope of Rule of Perception. The Stealth Hi/Bye often takes advantage of this.

Not to be confused with Black Screen of Death, which is more about what you don't see..