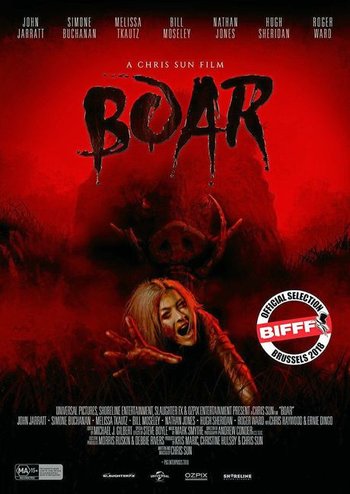 Boar is a 2017 Australian-produced horror film, which revolves around an innocent family of Australians — step-father Bruce (Bill Moseley), mother Debbie (Simone Buchanan), daughter Ella (Christie-Lee Britten), son Bart (Griffin Walsh), and Ella's boyfriend Robert (Hugh Sheridan) — heading out for a holiday into the Australian countryside to stay with Debbie's brother Bernie (Nathan Jones), a farmer in the remote regions. Unbeknownst to all, the region's feral pig population has produced a genetic freak; an enormous boar, big enough to topple cars, which has developed a taste for human flesh. When their paths collide, it becomes a desperate fight for survival.

Boar was written and directed by Chris Sun.