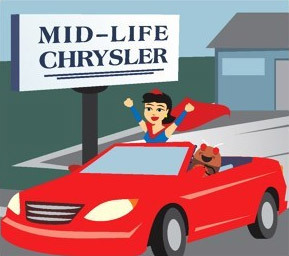 will have to feel better about their mid-lives.
Caroline: Uh, whose car is that out front?
Lester: Mine. 1970 Pontiac Firebird. The car I've always wanted, and now I have it. I rule!
— American Beauty
Advertisement:

This car is probably red, usually a convertible, always expensive and zippy, and necessarily driven by a middle-aged man. If he's been around for a while, this will be the first time he's shown any tendency to care about what he drives. It is almost always Compensating for Something.

Sometimes a motorcycle can fill the same function.

Truth in Television when you're not lucky enough to have been born wealthy: it takes time to amass enough money for a Cool Car.