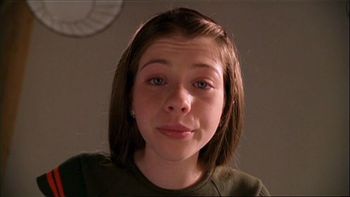 "Can we go now?"
"Nobody knows who I am. Not the real me."
— Dawn Summers
Advertisement:

Buffy trains and works on her strength with the help of Giles and some crystals. She practices a handstand on a block of wood, but falls when her sister, Dawn, knocks over the crystals. In the morning, Dawn continues annoying Buffy by emptying the milk carton. Joyce asks Buffy to take Dawn shopping for school supplies, but Riley reminds her they had already made plans. Buffy has to cancel so she can go work with Giles. Giles drives the sisters on their errands, having trouble with the automatic transmission in his new BMW convertible. They spot Willow and Tara heading for the Magic Box, and Buffy tells Willow that she's dropping Drama in favor of more Slayer training.

At the shop, the gang finds the owner dead, killed by vampires. Buffy sends Dawn outside, where she encounters a deranged man. He seems to recognize her, saying, "You don't belong here." She is upset until Tara comes to keep her company.

The gang realizes that a pack of vampires raided the shop for books on how to defeat the Slayer, under Harmony's leadership. Giles admires the shop and its profit potential.

That night, Dawn is happy to have Xander as her babysitter, until she discovers Anya is coming too. Harmony arrives to challenge Buffy, but is disappointed when she's not there.

Xander taunts Harmony and her minions from the safety of the house until Dawn mistakenly invites the vampire inside. After Harmony puts up a fight, Xander literally kicks her out of the house. Harmony later encounters Spike in the graveyard, and the two talk about Harmony's plans to kill the Slayer. While unpacking in their new place, Tara and Willow discuss how Dawn is having a hard time as the outsider of the Scooby Gang. Tara reveals that she has similar feelings as an outsider. On patrol, Buffy is fuming about the lecture she received from her mother about allowing Dawn to see a dead body. Riley tries to talk some sense into her, pointing out she and Dawn resent each other for similar reasons.

When they return home, Xander tells Buffy about Harmony and—after the Slayer stops laughing—she gets angry that Dawn invited Harmony inside, even though it was purely unintentional. Buffy complains to Riley and Xander about the trouble Dawn causes and how she can't always be there to protect her; Dawn listens from the hall and runs outside in tears. Before Anya can bring Dawn back inside, Harmony's vampire minions capture Dawn and attack Anya. Buffy then runs out to find her sister, leaving Xander and Riley to take care of Anya, who requires hospitalization.

Harmony explains to her minions that Dawn is bait, meaning they can't eat her. Harmony complains to Dawn about her problems until her mutinous minions attempt to kill them both. Buffy—who had threatened Spike until he revealed Harmony's location—arrives and easily kills most of the minions as Harmony escapes. Buffy has trouble with one, Mort, but eventually manages to stake him with a hideous wooden unicorn of Harmony's. The Slayer frees her sister and when they get home, they agree not to tell their mother. The next day, Buffy and Giles talk about his decision to take over the Magic Box, while Dawn writes in her journal that Buffy still thinks she's a nobody, but she's going to be in for a surprise...