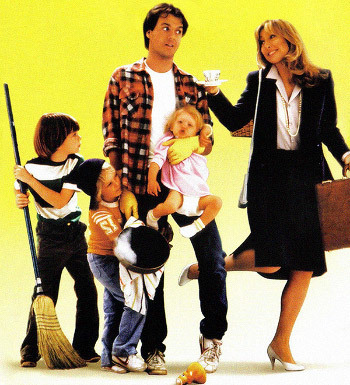 "I can't do it!" Hamal sobbed and spun the wheel on the car until we were headed back towards the gate. "I'm going home. I was never cut out for the police, it was all my mother's idea; she wanted me to be like a daughter to her and made a tomgirl out of me. When all I ever wanted to be was a simple house husband like my father!"
— The Stainless Steel Rat's Revenge
Advertisement:

This is a male character who serves as the primary domestic in his family as opposed to his (usually female) significant other. He is organized when it comes to homemaking, knows how to cook and clean, and is good with kids. This is usually because it is his partner who works to support the family, and due to an unwillingness to have both parents absent, he takes it upon himself to do the "wife's duties." Alternatively, it could be because his partner lacks competence in such duties and he has to fill the role by necessity.

Such a character is often contrasted with a less-than-feminine female character, or another male character who is a "real man", and thus useless around the house. The usual Double Standard applies in that, for the most part, such a character is assumed to be less "manly" than one who doesn't do these things, because (for some reason) men aren't supposed to be good at these sort of things. Quite often, a man who is a full-time househusband is seen as somehow a failure or a "bum" for "not working," even by people who have no problem with women being full-time homemakers and who would never even hint that a woman who stayed home to keep house and take care of the kids didn't have "a job". In addition, a lot of the "support network" of stay-at-home moms is often unavailable to a stay-at-home dad, because being a male makes the househusband an outsider, even if he has the same day-to-day experiences and problems as the stay-at-home mom.

Additionally, a full-time househusband may be patronizingly praised as though he's obviously making some incredible sacrifice, since of course men can't possibly enjoy childcare or domestic work, and/or somehow exceeding the limits of what men are capable of by displaying any actual competence at those things. Sometimes this happens while other people are calling him a bum.

When Played for Laughs, the trope is often a part of a Fish out of Water story wherein a man with no prior experience at, or interest in, domestic work is forced by circumstances into the House Husband role and has to adapt quickly.

Obviously this is occasional Truth in Television. The phrase "house husband" was popularized in the press when John Lennon retired from music for five years to "bake bread and take care of the baby".

Etymologically speaking, this phrase or compound word suffers from semantic redundancy because the word husband derives from the Old English compounds that literally meant "householder".